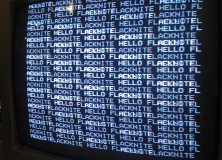 As our members and followers, will be aware, Flacknite is our semi-regular monthly hackathon, spanning at least 24 hours, which is open to everyone. It provides a bed, a home and an excuse for projects that have been put back, and a lively environment for more time-sensitive ones. As always, they’re catered with food and drink, which this month was generously sponsored by Instil Software.

The more exciting and eye-catching work took the form of some preparations for Culture Night, which has been making news throughout Belfast and scheduled for tonight, Friday 21st September. Robin, an artist attending Culture Night, built and tested several high-power LED array bars, to be used in his project to under-illuminate a table. His work will be on show tonight near the Hayfield Market in Belfast City Centre.

A welcome break came in the form of Opera Pizza, which delivered a substantial order to our door for all to graze on. Beer and pizza flowed plentifully for several hours after the delivery.

Work continued in other parts of the building, with Dan Reid and Tom Gilmour working with others to bring to life two BBC Micro computers, both of which had dead power supplies. They were successful and much of the remainder of the night was spent programming the Micros, and upgrading their RAM installations. Dan continued in the following days to install more RAM and software, and the two computers are approaching “perfect working order” condition.

Others worked on personal projects and private endeavours, and most stuck around until the daylight hours on Sunday. Numbers waned due to sleep, but recovered later on Sunday. Overall, numbers were good and the atmosphere was great. Our next Flacknite will be next month, on the 20th October, and will be publicised heavily to let everyone know.

Thanks again to Instil Software for their generosity, and for everyone that came along to such a good night!

See you next time.

We are very pleased to announce the generous support of yet another group, the All Island Software Network, a joint partnership between Intertrade Ireland, the Irish Software Association, and Momentum, the Trade Association for IT in Northern Ireland. They supply businesses across the whole island of Ireland with plentiful funding, advice, routes for cross-border relations and training to allow companies to innovate and be competitive in both jurisdictions. END_OF_DOCUMENT_TOKEN_TO_BE_REPLACED