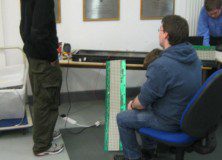 Over the years, several attempts have been made at making a Hackerspace/Makerspace  in Belfast, the aims of which were slightly different but centred around creating a shared experimental facility for the NI tech community. Some people have called it a ‘Geek Gym’, or a ‘Tech Playground’, others have called it ‘An Amateur Version of the NITC‘ but finally, Farset Labs is near realising that goal. Whichever goal that is.

A strong community of technical students and professionals has worked on this for many months (in some cases years), and we’re getting near the finish line.

We are going to build a space where people of all technical interests and experiences can come together to work on crazy individual or group projects. A space where people who may not be exposed to the latest and greatest bleeding edge computing technologies, can experiment with them in a near-enterprise server environment without having to piss off the boss. A space where where those ideas that would otherwise need lots of additional equipment, can be rapidly built and tested, in a relaxed environment. A space where people can chill out between projects and play with Legos.

It’s taken time to get this far, and it’s going to take a lot of time and community support to make this successful.