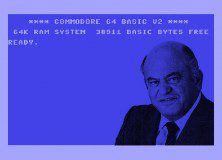 Today saw even more donations come in, especially of some really cool old gaming hardware. So we’ve taken a rush of blood to the head and decided to take them all out of their boxes tomorrow (Tuesday), put them out on tables and have a play.

You’re more than welcome to join us and explore vintage systems or sit and work at your own projects. Watch the Twitter feed to see when we open up (it’ll be late morning)!

The launch day went, in our humble opinions, fantastically.

As in, really fantastic.

We’ve met our targets and everything passed smoothly, but, far more importantly, we had an awful lot of fun.  A range of projects were attempted by those in the space over the 24-hr period, some of which were unexpected, all of which were cool. We can only mention a selection of the activities, but some of the most notable follow.

Andrew Sheppard learnt the ropes on an Arduino Uno and got some guidance on some of the low-level aspects of microcontroller interfacing. He also went nuts with a labeller in the kitchen. Ben Bland and Conor Flanagan, among other things, did the necessary measurements and are well on the way to creating a 3D model of the building. Eoghan Murray and Conor Robinson set up an amateur radio station in the Event Space, with an antenna running nearly the length of the building. It was illegal for around two minutes when one non-licensed member decided to try and chat to someone. Sighs were heard all round. Then David Kane joined them and they went numbers station hunting, successfully tuning into UVB-76 from Russia on 4625kHz.

Meanwhile, in the lounge, Niall Bole masterminded a gaming system with an Xbox 360 and projector that kept everyone entertained when they weren’t working. Likewise, the library and the vintage hardware were used both for amusement and for serious reference, with copies of Wired and Teach Yourself Electricity and Electronics (Gibilisco), to name a couple, taken off the shelves and used. The ancient CRO was connected to…er…something that Conor Robinson built in the Event Space, with William Cully looking on, vaguely confused at the erratic waveform. The Portege laptop also disappeared with Chris Murray and was booted and explored.

The kitchen proved to be a good social hub, with people taking a break around coffee or a beer, leaving the gamers and their spectators at peace in the lounge, though cheers and lamentations could be heard constantly through the open door. We thought heating may be a problem (and had electric heaters at the ready), due to our lack of gas for the boiler at the minute, but attendance was so good that body heat (plus the heat from our servers) warmed the building comfortably.

The atmosphere was brilliant, with a party mood blended perfectly with a work ethos and several people mucked in to get the network infrastructure upgraded and humming along even faster than before. All of this was fuelled off snacks, soft drinks and some harder ones provided by Farset Labs, as well as a pizza order organised by the Prince of Pizza, Niall Bole. Rachel Gregg provided the most awesome cupcakes ever tasted by exhausted hackers, giving a taste of what the Bakerspace will be like.

We can’t mention everyone of the 30+ people who came to the space and their projects, mainly because I (David) didn’t even get the time to go around them all, despite wanting to, but there was a wide variety of awesomeness being attempted.

The 24-hr event thinned out on the Saturday morning, but, after people got a few hours sleep, several members (and the directors) came back and worked in the space together, with the Tron soundtrack providing the backing music. It was great to see people eager to come back right away and everyone worked until around 10pm on the Saturday night. The space (at this time on a Sunday night) has six people currently in it…and we’re about to take a break and educate three of them in the wondrous series that is Firefly.

And so closes Farset Lab’s first weekend. We’re all wrecked, full of junk food and haven’t been seen by significant others in too long, but, damn, it was good.

Today is the day; After a long time coming (too long for some), Farset Labs is ready to launch in an ‘open beta’ stage.

From 1500, we’ll open the doors (for a small fee for non-members), and we’ll be live-blogging here for your delectation.

END_OF_DOCUMENT_TOKEN_TO_BE_REPLACED 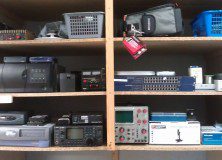 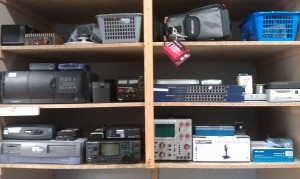 Another day of frantic work and continuous driving has brought us much closer to our launch tomorrow. The plumbers have completely fitted the toilets to a great standard and the electricians are making sense of the circuits around the building; the puzzle pieces that were outside our control have pretty much fallen into place. After a long day driving to collect tables, hoovering endless dust and generally cleaning up, we’re about to pack up for the night, exhausted.

We’ve fitted out the reception area with a little more server equipment and a slightly fancier network configuration, and have the water supply turned on, making the space a lot more pleasant to be in. The contractors are finishing up and our outer window frames received a welcome coat of paint. Windows were scraped and the equipment store was further populated.

Tomorrow morning, final preparations include the plumbers and electricians finishing up, the hopeful delivery of our electric cooker, preparations for the rooms and general last-minute cleaning.

We can’t wait to see you all at our launch event tomorrow at 3pm! 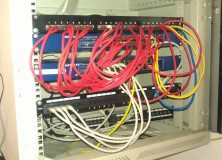 The Farset Labs team is still in the space at one in the morning – now that’s dedication!

We went in this morning with no working network, no backbone connection, little equipment and no computers running. Over fourteen hard hours later, we now have every viable socket networked, switches installed, WiFi running, our Tibus internet connection enabled, a PowerEdge running ESXi with virtual machines, the RM1 up and booted and some new equipment donated. The plumbers have been in and mostly fitted out the remaining toilet and we’re expecting the cooker shortly. The plumbing should be finished by Thursday night/Friday morning and the spark will be in again tomorrow to finish his work. 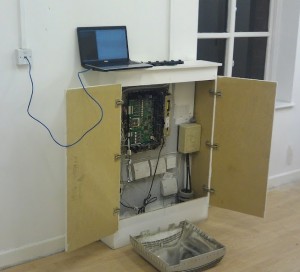 Cleaning will take place tomorrow (er…today, Thursday – probably time to leave!) and we’ll finish up all the random little problems, such as the fact that our laser printer is in triage and one of the toilet doors is not quite ready for Release Candidate status.

The space is still unquestionably in beta itself, but we’re proud of it and we think you’ll find it’s rustic (aka, structurally-supported-entirely-by-plaster), but charming. It’s going to be an amazing home for the tech community in Belfast and I cannot wait for our doors to open officially at 3pm on Friday.

See you all then – I think we may go to bed soon!